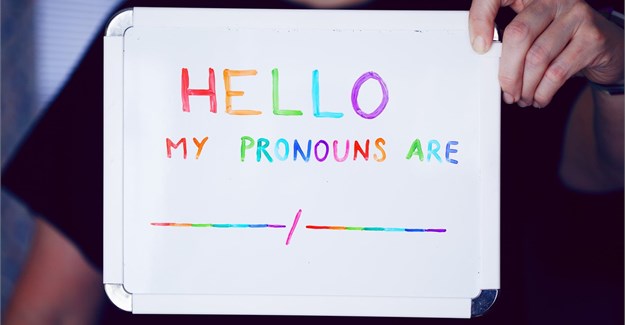 VMLY&R has announced the launch of the Proud Pronoun Project, an online platform where individuals have the option to select their personal gender pronouns and produce a beautiful illustration to display as Teams or Zoom backgrounds. This can then be used for meetings as a way to inform the people they work with every day how they should be identified.

The site provides options for all cis, transgender and non-binary individuals to select their pronouns. Pronouns range from he/him/his, she/her/hers, they/them/theirs and zi/zir/zirs – or any combination of the 24 options on the site. An individual’s choice goes to the very core of their own identity.

According to the 2015 National Transgender Statistic Survey, 35% of employed adults reported being fired, denied a promotion, or experiencing mistreatment at work because of their gender.

Currently, more employees than ever understand that gender can be expansive. Experts also agree that correct pronoun usage can empower teams, and ultimately, is a strong business driver. About one in five adults knows someone who uses gender-neutral pronouns, according to a 2019 Pew Research report.

Millennials – who will represent three quarters of the workforce in 2025 – are more likely to identify as LGBTQ+ (20%) than previous generations generation X (12%) and baby boomers (7%), according to a 2017 Harris Poll conducted for Glaad.

Generation Z is even more likely to say they know someone who prefers gender-neutral pronouns (35%) than Millennials (25%), according to the Pew Research study. Due to how easy it can be to misinterpret pronouns, that figure is likely a lot higher.

From a business point of view, the risks of not getting your employee experience right will diminish the ability to attract and retain top talent. A 2020 Harvard Business Review article pointed out that companies that are LGBTQ+ friendly usually focus more on sexual identity (lesbian, gay, bisexual) rather than gender and queer identity. Organisations will do themselves a huge disservice by ignoring these shifting gender norms.

Dono White, senior strategic lead VMLY&R South Africa (he/him), said, “South Africa has been hailed as having one of the most progressive and democratic constitutions in the world. In 2005, South Africa legalised same-sex marriage and in 2020 this was amended to protect civil unions by making it illegal to refuse same-sex marriages. While we are progressive when it comes to sexual orientation, gender as a whole needs visibility and protections.”

“South Africa is facing a gender-based violence crisis. In 2021 we are seeing traction with parliament addressing gender-based violence and femicide and deliberating the bills put forward. Abuse against women deserves immediate action. Gender as a whole, though, is just getting started here, and we need to do better, push further and do better to accelerate the respect for all genders, biological or identified. I hope the Proud Pronoun Project can give South Africans a sense of pride in owning their identity without fear, but also highlight the importance of a brave conversation South Africa needed to have yesterday!” he said.

How the Proud Pronoun Project came about

The campaign was brainstormed and produced by VMLY&R’s LGBTQ+ employee resource group (ERG). The ERG is a global employee-led group with the shared goal of creating a place of belonging. It also aims to create a safe space for all employees to express themselves across the world.

For this campaign, VMLY&R’s LGBTQ ERG teamed up with illustrators, Lauren Phillips (she/her) and Frank Norton (he/him) to produce the artwork. They are encouraging individuals to display their preferred pronouns across social platforms, zoom backgrounds, and more.

VMLY&R aims to ensure the realities around gender fluidity isn’t simply about building new policies, creating new internal systems, or pronouns in email signatures – it’s about understanding how gender norms and the binary affect everybody and reimagining how gender takes shape across the entire company, customer experience and brands.

For the month of June, VMLY&R will be running a social media campaign to crowdsource pronouns in South Africa’s official and indigenous languages. These will be added to the Proud Pronoun Project as part of a phase two roll-out later this year.

The Intersection Between Youth Unemployment And The Real Estate Sector

‘Education for Social Change’ mantra for 2019 Festival of Learning