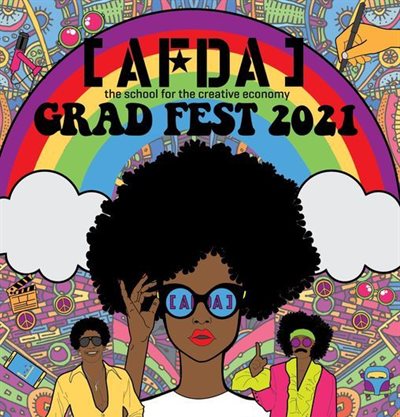 Over the last 25 years, Afda students in their final year of their undergraduate and postgraduate degrees showcase their work at the annual Afda Graduation Festival.

The festival is a multi-faceted and multi-medium event, which will take on a hybrid format – hosted online as well as traditionally in cinemas, theatres and studio venues in Johannesburg, Cape Town, Durban and Port Elizabeth from 19 November to 1 December 2021.

“The annual Afda Graduation Festival is an important platform for our final year undergraduate and postgraduate students to showcase the final practical outcome of their qualification. This outcome is the culmination of their learning journey at Afda and finding their voice as young creatives. The content the Afda graduates create is culturally relevant and engaging content for their chosen target markets. Many meaningful industry collaborations and connections have resulted from our graduation festival in previous years, creating opportunities for Afda students as well as industry and media stakeholders alike,” says Afda CEO, Teresa Passchier.

Previous Afda graduation productions have been hugely successful both locally and abroad on the film festival circuit. These include the film Elalini which won the Best Foreign Student Film Oscar in 2006, Kanye Kanye which won over 20 best short film awards worldwide, and was a finalist for the Oscars and Cannes in 2012. Additionally Die Windpomp and Hollywood in my Huis were Afda student films which were later developed into feature films. Afda student films have also won eight Saftas in the Best Student Film category.

Congratulations to all the students and staff, who have not let the difficulties of 2021 hinder their goal to create culturally relevant content for a worldwide audience. They have embraced innovative ideas and technology, showed true grit and determination and most importantly, kept their passion and dreams as creatives alive.

Youth coaches given training and skills to support teens

R20m in bursaries available through The Knowledge Trust Career Expo