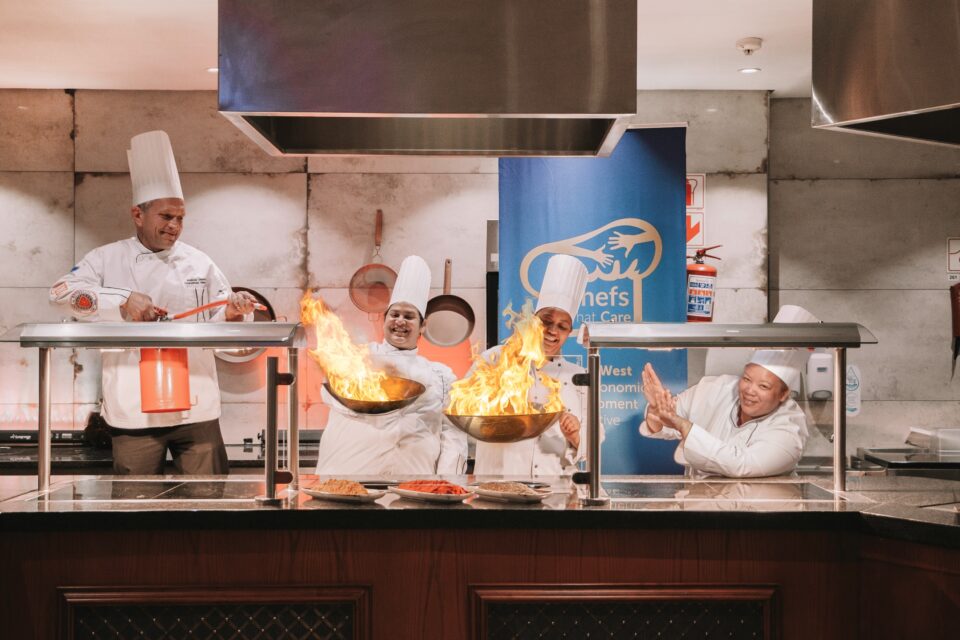 Chefs from GrandWest in Cape Town were proclaimed the winners of the Rise Against Hunger (RAH) World Food Day challenge yesterday, 16 October.

In total, the challenge raised over R51 000 for the non-profit organisation. GrandWest won in each of the three categories – most monies raised, public vote and the SA Chefs Association vote.

RAH had challenged chefs from six Sun International properties to create dishes using the same basic ingredients in the 25kg dried food packs that they deliver to school feeding schemes. There was no restriction on additional ingredients teams could use but they had to use the basic ingredients.

RAH CEO Brian Nell said “Hearty congratulations to all the teams and well done to GrandWest’s Chefs that Care. A special shout out to our runners up, Time Square’s Legends which was ranked second by the SA Chefs Association’s second choice, and Golden Valley’s Two Chefs and a Boss which received the second highest number of public votes and raised the second most funds. We would like to thank each and every team for taking part in this amazing cause.”

Sun International’s Group Socio-Economic Development Manager Heidi Edson said, “Like the rest of the industry our chefs are confronted by ongoing obstacles. Covid-19 meant each team had to be filmed creating the dishes in their own kitchens. Despite this, they rose to the challenge to make a difference and the videos show they had fun in the process. A special thank you to all the teams for bringing enthusiasm and passion to the challenge and we all look forward to seeing what they will produce next year.”

The videos can all be found on RAH’s website https://rahafrica.org/chef-showdown/.

·         GrandWest Chefs that Care wanted to show how to make amazing dishes using the simple staple ingredients. They created a savoury rice, vetarian frikkadels with a twist, and chicken roulade. The team received 419 of the popular votes and raised R32 500.00.

·         Golden Valley’s 2 Chefs and A Boss promised to use the basic ingredients in a tasty way which they did with their innovative gluten free roosterkoek, juicy vegetarian burger and red and brown onion sauce. The team received 330 of the popular votes and raised R16 989.00.

·         The Time Square Legends said they are motivated to make a difference. The team added a rolled-oxtail to spice up their risotto dish. The team received 204 of the popular votes and raised R300.00.

·         Windmill Casino’s Perfect Peppers hoped to showcase what is possible for people surviving on meagre subsidies can achieve by just using the ingredients supplied. They added onions, peppers, garlic and ginger to create a fresh and delicious vegetarian risotto. The team received 115 of the popular votes and raised R670.00.

·         Team Sibaya was motivated to use their skills, passion and teamwork to reduce hunger with their creative Japanese inspired fried rice balls and savoury prawn rice stuffed into a pineapple. The team received 72 of the popular votes and raised R270.00.

·         The Maslow Beasts promised to put passion on a plate by adding a juicy ribeye steak on the bone to their plate. The team received 110 of the popular votes and raised R620.00.

Jocelyn Myers-Adams from SA Chefs said “SAChefs is proud to support the Rise Against Hunger Chefs Challenge and to participate as the official judges.  Rise Against Hunger has been offering solutions for reducing world hunger and is assisting with the hunger crisis faced daily by many fellow South Africans.  This campaign creates awareness of the plight faced by many, while stimulating growth and skills development of many young chefs around the country.  We are thrilled to be a part of this campaign and to assist with this cause, along with RAH, and look forward to growing this competition in the future.  We wish RAH great success with their quest to eradicate world hunger.”

The Chef’s Challenge, which started in September, culminates in World Food Day on October 16, and aims to create awareness of the hunger crisis in South Africa.

Legislator distributes 30 tonnes of cement to schools and clinics