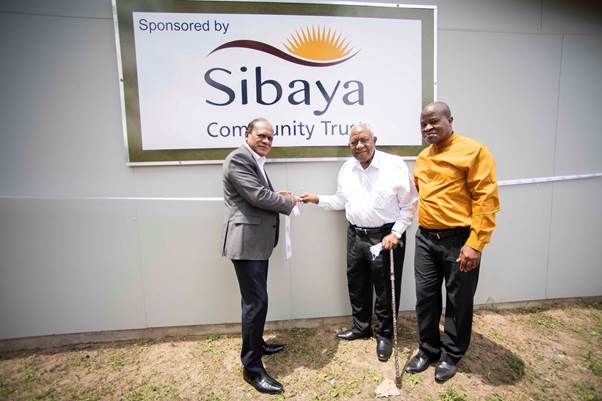 At the handover ceremony on Thursday, 09 December 2021, Vivian Reddy, Chairman of Sibaya Casino and Sibaya Community Trust together with Trustee Former Judge President, Vuka Tshabalala handed over the classrooms and ablution facilities to Sarasvati Primary School in the rural area of Frasers.

Reddy said that he was passionate about community upliftment and doing service in the rural areas has always been rewarding.He added that education has been on top of the agenda at the Trust and spoke of the MADI program on which the Trust spent over 14 million by adopting 14 schools that had zero percent pass rate in science and math.

He said that the approach was multi-pronged in that facilities at schools had to be upgraded, digital learning spaces created together with the necessary technological infrastructure, deployment of specialist skills had to be recruited and bursaries handed out.

This program enabled the pass rate to go from 0 percent to 85 % in a 2-year period. This was a remarkable achievement for the schools and for us at the Trust, he added “Our recent IMBELEKO DIGITAL ACADEMY built in the Valley of a Thousand Hills will enable 1000s of youth to pursue a career in the digital and robotic space,” said Reddy.

“Being here on this historical ground that was donated by the Subramani family from Fraser over 78 years ago is very special as it carries a rich history on many levels.I was intrigued to learn that on this very ground, our Former President Nelson Mandela used to have his meetings with Chief Albert Luthuli. This was mentioned in the book, “A Long Walk to Freedom,” of their meetings in Fraser.

When I heard of the dire need of classrooms for this school, and taking into consideration the plight of the children, the decision to sponsor the classrooms was an easy one for us at the Trust,” he added.

Mr Joe Zoko, the Principal at Sarasvati School spoke of the eight classrooms they originally and which had to be condemned by the Department of Education due to the state of collapse of the building, leaving the children with hardly any classrooms.

Whilst the Department of Education loaned a few pre fab units to them, it was no way near accommodating the over 300 learners.“Sibaya Community Trust’s sponsorship came at a very crucial point when our learners were suffering the consequences of being without classrooms which also impacted on their mental wellbeing,” he added.

He thanked Vivian Reddy for his role in community upliftment and for the generous donation to his school.Reddy acknowledged the workmanship of the project undertaken by GR Extra Space and thanked them for a job well done.

Scholarships open up a world of opportunities for local learners