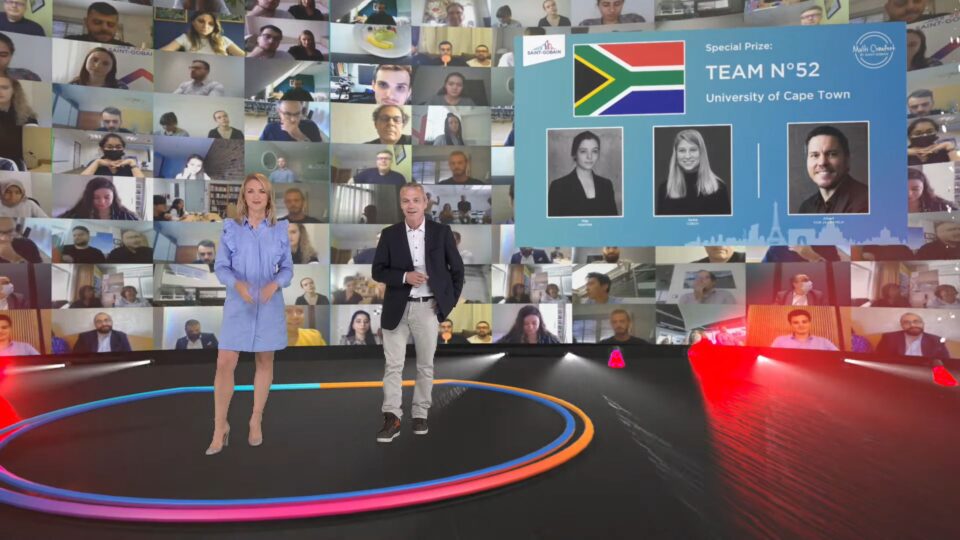 Saint-Gobain has awarded the prizes for the 16th edition of its “Multi Comfort” international student competition. This year, the challenge was to convert the post-industrial area of the Coignet company in Saint-Denis (France) a living, learning and leisure area in the heart of a large green space, respecting both the historical heritage and the sustainable development needs of modern neighbourhoods, in collaboration with the city of Saint-Denis.

The first prize was awarded to the team from the Ecole Nationale Supérieure d’Architecture et de Paysage de Bordeaux (ENSAP Bordeaux) in co-operation with the Institut Supérieur Aquitain du Bâtiment et des Travaux Publics d’Anglet (ISA BTP Anglet). The jury particularly liked the concept of the “Pedagogic Lab” project, which aims to open up the neighbourhood to its environment and make it a place of learning and experimentation. The clear organization around a school preserves a vast park, a real green lung in the heart of the city. The project implements innovative solutions to reduce environmental impacts and guarantee excellent comfort in all seasons to the inhabitants, while remaining perfectly realistic.

The Spanish team from the Escuela Técnica Superior de Vallès (ETSAV – UP) won the second prize. In the “Cycle of Life” project the jury particularly liked the close connection of housing with nature reinvented in a very attractive park with its water features linked to the river Seine. The proposals for the rehabilitation of the historic buildings are particularly original and enhance the heritage in a powerful way. The modular design of the dwellings allowing a maximum of flexibility in time to adapt them to the demographic evolution was particularly praised by the jury.

The team from the Universidad Nacional Autonoma de México (UNAM) was awarded the third prize. The jury liked the “Urban Mosaic” project for its emphasis on social integration and its concern to develop a new neighbourhood that is fully connected to the rest of the city. The jury also praised the interesting conversion of historic buildings and the large space left to nature, with water features and trees, to create an island of coolness in the city. Technically, the project pays special attention to comfort and the reduction of environmental impacts.

The special prize of this edition was given to the South African team from the University of Cape Town (UCT). The jury was won over by the excellence, audacity and originality of the “Mont Verde” project, which reinvents collective housing around a wetland park to regenerate local biodiversity. The very pure architecture offers a sense of security and conviviality while guaranteeing the comfort of the inhabitants. Well connected to the rest of the city, the project imagines, beyond an island of renewed nature, a lively neighbourhood with shopping streets.

The student prize which is awarded by the other student teams participating in the contest was given to the team from the Czech Technical University in Prague (CTU).

“The dynamics of Saint-Denis is emblematic of the changes taking place in cities today, and the project proposed to candidates this year is fully in line with the spirit of the “Multi Comfort” competition. It is also aligned with Saint-Gobain’s vision: to be the worldwide reference in sustainable construction. I hope that this event will be a springboard for the students and an enriching experience both professionally and personally. On behalf of all the Saint-Gobain teams, I would like to extend my sincere congratulations to the winners and to all the candidates!” declared Pierre-André de Chalendar, Chairman and CEO of Saint-Gobain, as he presented the awards with Benoit Bazin, the Group’s Chief Operating Officer.

“The city of Saint-Denis is undergoing a major transformation and the conversion of the Coignet company site is a challenge for us that the students have taken up by designing comfortable, low-carbon buildings, a pleasant environment to live in, a school, housing, and a park, while preserving and imagining new functions for the Maison Coignet and the warehouses. A big thank you to everyone for the richness and originality of your projects and your valuable ideas that will serve as a source of inspiration,” said Mathieu Hanotin, Mayor of Saint-Denis and President of Plaine Commune.

Created in 2004, this competition, aimed primarily at architecture, engineering and design students, is designed to highlight the expertise of students around a project based on the real needs of a neighbourhood or city, using Saint-Gobain’s sustainable construction approach to create living spaces that respect the planet and the well-being of residents.

Holding the competition in a 100% digital format helped reduce CO2 emissions. These avoided emissions were converted into a donation of €15,000 to be given to the association “Régie de Quartiers” in Saint-Denis, which respects the environment and well-being in housing.