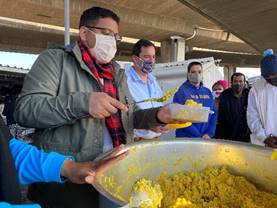 First opened in 2018 as a temporary shelter, the facility has had nearly 1 400 people passing through its gates, and served as a model for two more safe spaces that have since opened their doors.The Culemborg Safe Space opened on 29 June 2018 as a pilot project, with the aim of addressing the shortage of shelter space, and to act as a stepping stone for those persons who want help with getting off the street.

The site can accommodate 230 people, but since the Covid-19 lockdown and related regulations, the number has dropped to 180 to ensure sufficient social distancing.

Since its opening, 1 377 people have passed through the Safe Space.

· 167 were integrated into communities

· 60 were reunited with their families

· 210 were employed through the Expanded Public Works Programme

· 94 were assisted with Identity Documents

“There are numerous success stories that have come about because of the existence of the Safe Space, but also the dedication and commitment of staff and clients alike. We have individuals who have managed to find permanent employment and who are living independently, persons who were able to regain custody of their children due to the developmental programmes they accessed via the Safe Space, and others who have been sober for as long as two years and counting.

“A former Safe Space resident who volunteered at the facility during his stay, attended the developmental programmes on offer and is now managing the Culemborg Safe Space – testament to the real difference that Culemborg and the City’s existing interventions for street people can make,” said the City’s Mayoral Committee Member for Community Services and Health, Councillor Zahid Badroodien.

During its three-year existence, just over 500 occupants were removed from the Safe Space register after staying away for more than three nights, while 201 others left the facility voluntarily.

“All of the City’s interventions for street people are voluntary and no one can be forced to accept assistance. Individuals are referred to the Safe Space by our field workers upon indicating that they want help, but in some cases, they return to the street, and remain there, or it takes several more attempts at the rehabilitation process before real progress is made.

Truly helping a person on the street takes more than a handout, or a space in a shelter. There is so much work that goes into not only rehabilitating the individual, but also mending fences with family and getting them to a place where they’re able to reintegrate into society. The City works tirelessly in this regard, along with numerous other role-players and partners. Far too often this work is overshadowed by unfair criticism and finger-pointing, which helps no one,” added Councillor Badroodien.

Digital Deliverance for the communications industry