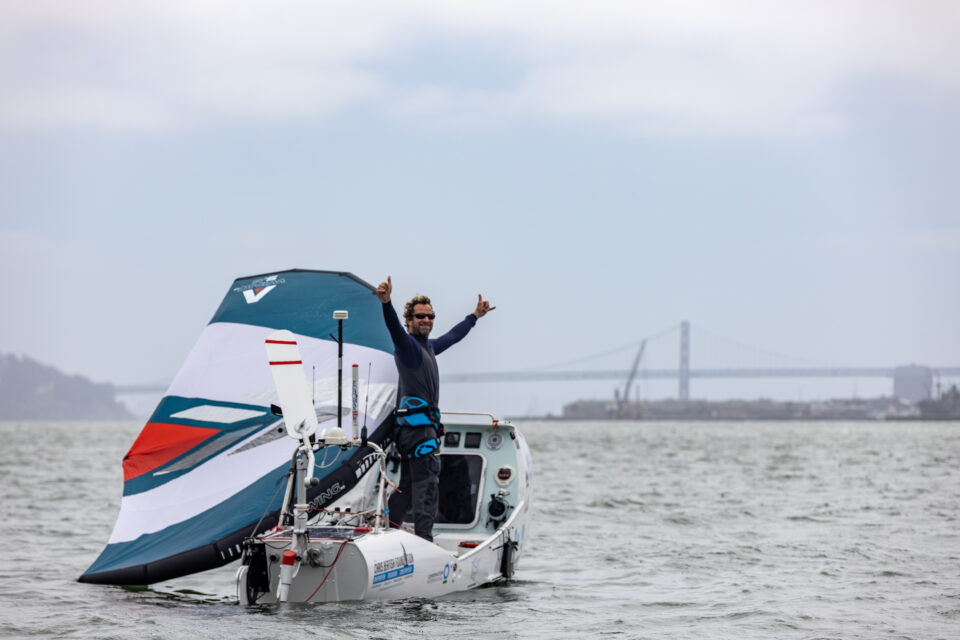 Chris Bertish, award-winning waterman and Conservationist, has set a world record for the longest distance traveled on a wing-foil, solo and unsupported at 212 miles—the first milestone in his Transpacific Wing Project, a 2,750-mile journey by wing foil across the Pacific Ocean from Half Moon Bay, California to Oahu, Hawaii with the goal of giving back to education, the ocean and the planet. Having launched on Tuesday, June 8, 2021, Bertish made the critical decision to temporarily halt the project on Sunday afternoon and head into Morro Bay for repairs to his craft.

Chris’s strategy of starting from Half Moon Bay allowed him to skirt the coast South when he left in case there were any major issues that came up during the first 72 hours before turning right and west to head far offshore into the Pacific, as after this decision is made, there is no turning back.

At about 7 p.m. on the second night, the Impifish craft had a leak and started taking on a bit of water from a point that was difficult to access, but Chris managed to fix it within hours. A few days later, he arrived in the Big Sur region where the fog rolled in and seas increased to 2-4 meters as wind set into 25-35 knots with very cold and misty conditions. As the winds started easing, some of the craft’s electronics systems drained, which shouldn’t happen through the night. Chris deployed his sea anchor until the morning so that with the morning sun he could start recharging his solar electronics systems. It was then that he realized that moving forward across the Pacific was not feasible.

On late Sunday evening, Chris arrived at Morro Bay where he was towed to shore by the Coast Guard. He will restart the crossing once everything is fixed, either over the next month or early next season, depending on the weather window and how long it takes for repairs.

“I’m very happy and proud of what we’ve managed to achieve with the new world record. I had a great opportunity to be able to test all the systems and find solutions to making the craft right so I can leave again once the weather and craft are ready, whenever that may be. We’re looking forward to being able to restart and finish the project soon,” said Bertish. “With all these adventures you have to be 100% confident in your craft and the integrity of the vessel you’re with, and until that’s in place, the only right and rational decision is to get the craft up to speed before continuing on.”

The Transpacific Wing Project will help raise awareness and funding for charitable organizations and global initiatives including Sea Shepherd, Conservation International, Ocean Unite and ocean education and sustainability programs, all through the Chris Bertish Foundation, a 501c3 organization established in 2020 with the goal of building awareness, giving back and being a beacon of inspiration and positive change for youth and the world.

World Athletics reschedules Under-20 Championships due to COVID-19