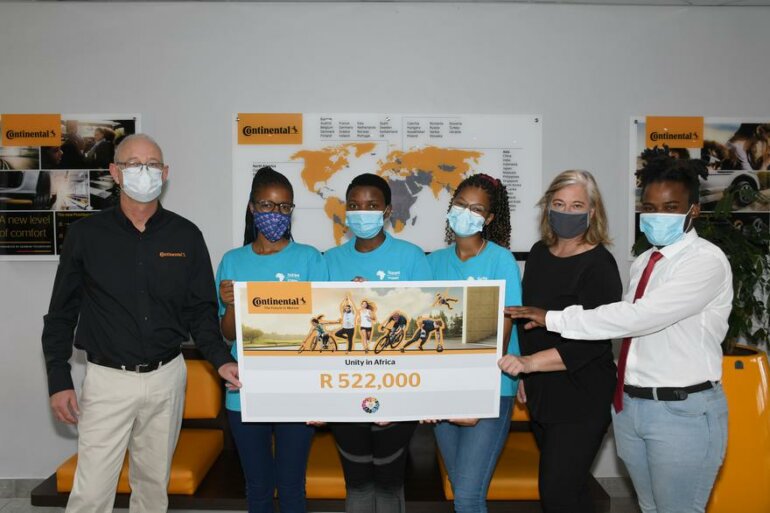 In an extended celebration of its global 150th anniversary in October, Continental Tyre South Africa (CTSA) made this a year of giving by donating over R2-million to 15 charities benefiting individuals in Nelson Mandela Bay.

“Continental’s 150th anniversary was a momentous occasion for the company, celebrating 15 decades of innovation and excellence in the tyre industry, as well as in the broader automotive sector,” says Martin Buday, Managing Director of Continental Tyre South Africa.

“As one of the country’s leading tyre manufacturers with a local heritage spanning 74 years, Continental currently employs around 1 100 people in South Africa. We used the 150th anniversary to celebrate with our employees, and also to make a meaningful impact on the communities in which we operate,” Buday says. “Accordingly, we donated more than R2-million to 15 charities in Gqeberha to help those in need during these difficult times.”

Unity in Africa was the largest beneficiary, receiving R522 000 in support of its iGEMS (incubating Great Engineering MindS) programme which is tackling the high levels of youth unemployment in the region.

“The objective of iGEMS is to incubate youth to eventually graduate with a tertiary engineering qualification that enables them to obtain permanent employment with our member companies,” explains Berenice Rose, Director of Unity in Africa.

“Our first pilot intake of 16 grade 11 pupils was in 2015, and we now recruit approximately 25 grade 11 learners annually to follow the four-phase programme. We are proud to report that 100 percent of our students thus far have successfully obtained bursaries or scholarships from industry and scholarship donors,” Rose says.

The current recruitment process is a thorough one, starting with an annual roadshow to create awareness around engineering, followed by the submission of application forms. Once maths and science benchmarks have been measured, a first interview and technical test takes place. Next comes psychometric testing and an interview with the Unity in Africa director. The final step in the process is the submission of final grade 10 reports and a practical group activity where students are observed to assess their ability to follow instructions, work as a team and complete a task in a given timeframe.

The benefits for participating students are immense and range from the learning of vital leadership skills to an improvement of school marks. Bridging the gap between school, work and tertiary studies, it provides them with the opportunity to learn from captains of industry and increases their employment potential.

“We would like to thank CTSA for its support of the iGMES learners. The successful incubation of engineering talent cannot be achieved without the support of the corporate sector, and through Continental’s generosity we are able to see these young enthusiastic minds achieve their full potential,” says Rose.

Buday concurs: “Our support for iGEMS is an investment in the future of South Africa. It is also heartening to see that the programme promotes gender equality with almost half of students being female, so this is an important step in addressing the gender inequalities impacting our society.”

Other charities to benefit from Continental’s financial support in 2021 included SOS Children’s Village, which seeks to empower youth to be independent and resilient contributing members of society. Funding from CTSA is used towards the care and further studies of young people living in the SOS Children’s Village.

CTSA also provided support to the Association for the Physically Disabled, Victory Kids, Helenvale Centre of Hope, and the Ubomi Obutsha Centre. The latter is a community-based non-profit organisation that helps to meet some of the material needs of poor families in the community, intervening in the situations of so-called high-risk families, as well as delivering engaging and supportive life skills and education support activities for the children of the community.

Following the unrest in KwaZulu-Natal and Gauteng in July, CTSA partnered with some of its BestDrive dealers, colleagues and customers based in those areas to donate R100 000 to the Gift of the Givers Foundation. The organisation played a major part in the food relief efforts in the places that were hardest hit by the civil unrest.

“The best part of celebrating our anniversary this year has been the opportunity to give back to the community and assist those in need. We hope that in doing so, we have helped make a difference in in peoples’ lives,” concludes Buday.

Many causes of death involving young children can be preventable.

SPAR Joins the fight to help END Gender Based Violence